How mistletoe got associated with Christmas is a bit of a mystery, but it’s probably because mistletoe is one of the few plant species that is green even in the winter. Imagine planning a winter celebration around 900 AD in northern Europe (just ignore the serfdom and disease for a moment): one of the few plants you could use for decoration would be mistletoe, since most other plants have either lost their leaves or died back in the middle of winter. Humans have a long, rich relationship with mistletoe, from its religious significance to the Noongar peoples of western Australia to its medicinal use in Nepal. But all these human relationships are only recent developments compared to the millennia-old bond that mistletoe shares with its closest partner: the mistletoebird. 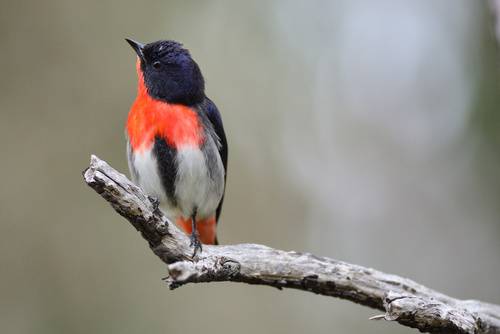 This wholesome orange and blue bird is a male mistletoebird (Dicaeum hirundinaceum). An astonishing 85% of its diet is mistletoe berries. This makes it one of the most specialized fruit-eating birds in the world, second only to the Dracula Parrot, another species worth looking up. It’s hard to fathom 85% of your diet being a single type of fruit – I know I wouldn’t want to only eat grapefruit for the rest of my life (especially since I might die from grapefruit poisoning). But two million years of coevolution* have ensured that mistletoebirds will never get sick of eating mistletoe berries. The mistletoebird is perfectly adapted to eating them, and mistletoe is perfectly adapted to take advantage of this fact. 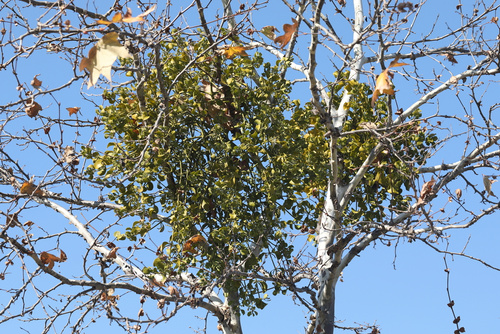 First, consider the lifestyle of a mistletoe and the challenges it faces. It is a parasitic plant that sucks sap and nutrients from its host, usually a large tree. But most mistletoes can only grow directly from a branch on the tree (e.g., see the photo above of the mistletoe Phoradendron macrophyllum in a sycamore). A seed that drops to the ground will die – they need their seeds to specifically be deposited high in the canopy. To maximize the odds that the mistletoe’s seeds will end up on a tree branch, it needs the mistletoebird’s help.

Here’s what happens: a mistletoebird eats a berry it plucks from a mistletoe. (You might wonder: “Isn’t this bad for the mistletoe that its precious offspring are being eaten?” The mistletoe fruit is digested, yes, but the mistletoe seed survives the bird’s digestive tract unscathed). From here, the seed is defecated onto a branch, surrounded by a package of goo specially formulated for maximum stickiness. The seed germinates, grows into a beautiful parasitic plant, and starts the cycle anew.

The Animal Planet’s take on this phenomenon, probably worth watching for the soundtrack alone.

The mistletoe gets what it wants from this relationship: dispersal of its seeds, and for the relatively small cost of the fruit it produces. The mistletoebird gets calories from the berries out of the deal, although it has to eat a lot of them to survive! This is a textbook example of a mutualism, a relationship where both parties benefit, but it’s unusual for the two parties to be so closely dependent on each other. This amazing degree of dependence means it is what’s called an obligate mutualism; ie., the relationship is required for both organisms’ survival. Mistletoebirds are so specialized that they’ve even evolved a shortened gut maximized for processing mistletoe berries. They digest the berries so quickly that it can take as little as four minutes to pass through the entire gut! On the other hand, mistletoe is equally specialized. Its seeds can’t survive the guts of other bird species as well, so it produces small, inconspicuous berries that only mistletoebirds are good at finding.

Mistletoe’s parasitic nature gives it a bad rep with some tree enthusiasts. But besides having a fascinating lifestyle, mistletoes and their birds are actually important for the ecosystems they live in. They’re so important in fact, that they’re technically considered keystone species (i.e., very important). Recent research shows that mistletoe presence promotes high biodiversity, probably because of its nutritious leaf litter and the over 200 species of birds that use it for nesting in Australia alone. For example, mistletoebirds usually nest in, you guessed it, mistletoe. But at the same time, cattle grazing disturbance can lead to stress on eucalyptus hosts, which causes a positive feedback loop where mistletoes increase in abundance, leading to even more stress on trees (apparently, about 20 mistletoes per hectare is the sweet spot for biodiversity). 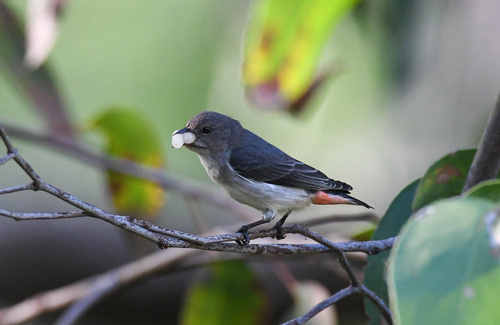 Although the mistletoebird of Australia has the most specialized relationship, berry specialization on mistletoes has evolved at least eight separate times in other bird species around the world. In North America, we have our own mistletoebird: the Phainopepla. It has a similar relationship with mistletoe, if not quite so specialized. But it does pick where it spends the winter in large part based on where mistletoe berries are most common. Where you find mistletoe in the southwestern US, you will probably find Phainopeplas, like this one: 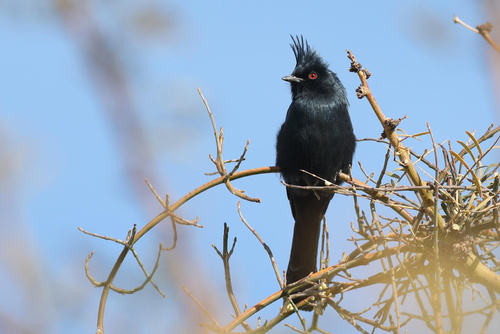